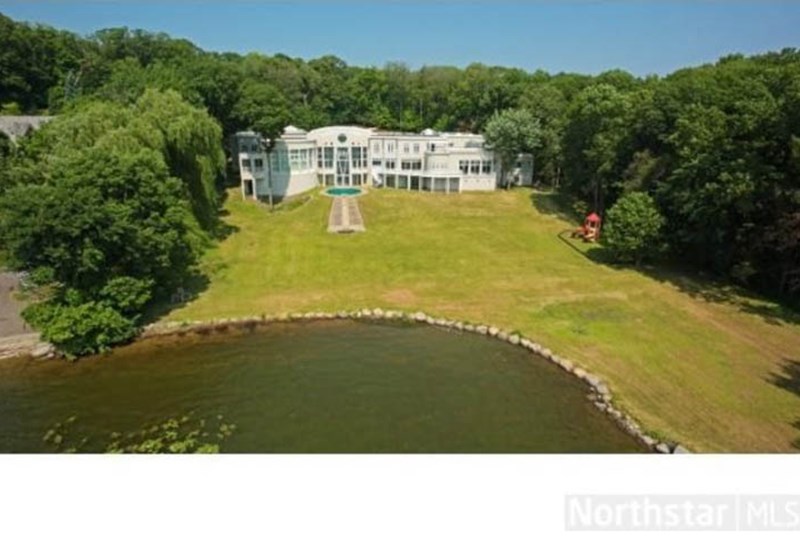 The former mansion home of James “Jimmy Jam” Harris, a record producer and Minnesota native, is for sale on Lake Minnetonka. The 22,000+ square foot estate is listed for $4.499 million.

Harris bought the Lake Minnetonka land for a mere $420,000 in 1987, and designed the contemporary home himself – the home was completed in 1991. The modern and bright two-story listing features a master suite with a wing of offices, an indoor movie theater, and a luxurious walk-in shower room. The home is appointed on 3.5 private acres on Hardscrabble Point in Minnetrista, and boasts nearly 300 feet of shoreline.

When Harris and his wife moved full-time to Los Angeles, they first listed the home for $11 million; it sat on the market for nearly a year before it sold in 2007 for $7 million. JP Morgan Chase has since acquired the property through foreclosure.

REALTOR® Scott Stabeck has stated that the home needs repairs, and buyers may even wish to tear down the home and rebuild. For the right owner who loves custom design and a bit of Hollywood flash, the home may be a perfect fit.

Who is Jimmy Jam, anyway?

Minnesota music buffs will know that Harris is the son of Minneapolis jazz musician Cornbread Harris. After meeting in high school, Jimmy Jam and Terry Lewis formed the group The Time, which toured as an opening act for Prince in the early 1980s. From there, Harris and Lewis began producing records and tracks for some of the most famous names in R&B and pop.

Harris and Lewis have since worked with the likes of Boyz II Men, Usher, Mariah Carey and Mary J. Blige. A career highlight was winning a Grammy for Janet Jackson's breakthrough album, Control. Historically, they have produced 16 Number One Billboard hits. Both currently live in California, where they own and operate Flyte Time West record studios in Santa Monica.